The future of publicly-owned forestry company Forestry Tasmania will be mapped out during an address in State Parliament by Resources Minister Paul Harriss on Wednesday.

PHOTO: The State Opposition says Forestry Tasmania has been hanging in limbo waiting to hear if it had a future. (ABC News: Tony King)

Mr Harriss said the Government intended to keep its election promise on the company.

Cabinet signed off on the Government's response to a report on the viability of Forestry Tasmania on Monday.

Mr Harriss said the Government intended to keep its election promise on the company.

"The Government took to the election a commitment to put Forestry Tasmania onto a sustainable footing into the future, and we intend to deliver," he said.

Mr Harriss said he and Treasurer Peter Gutwein received the departmental report a couple of weeks ago and have been "constructively" working through its recommendations.

They made a blue when they committed to withdrawing funding from Forestry Tasmania.
Tasmanian Opposition Leader Bryan Green
The Tasmanian Greens renewed its calls for the State Government to scrap the company.

Greens leader Kim Booth said he was worried the Government's review would be superficial.

"What we've achieved here is a financial disaster," he said.

"The Government's internal review into Forestry Tasmania will be completely inadequate in terms of getting to the bottom of what's happened since 1994 to 2014, when they've shrunk the value from $2.27 billion, down to $160 million."

Opposition leader Bryan Green said workers had been in limbo for months because the Government had refused to rule out winding up the business.

"That chair of the board has had to write to Forestry Tasmania workers reassuring them the Government is, he believes, hopefully working in their best interests," he said.

"They made a blue when they committed to withdrawing funding from Forestry Tasmania."

Mr Harriss said it had not yet been decided if the report would be made public.
Posted by Peter Campbell at 10:29 pm No comments:

Complicated science and direct action - trees are made of carbon 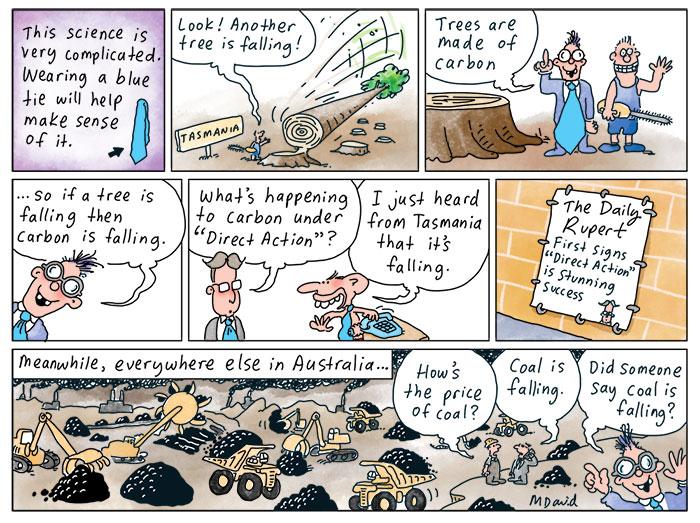 Posted by Peter Campbell at 9:58 pm No comments:


After carefully considering advice from the independent Threatened Species Scientific Committee
and submissions from experts, interested organisations and the wider community, I have decided to
list the Leadbeater’s possum as a ‘critically endangered’ species.

The Threatened Species Scientific Committee’s recommendation was clear and unequivocal regarding the need to transfer the species from endangered to critically endangered.

Leadbeater’s possums have very specific habitat requirements in order for them to survive and flourish. Sadly, almost half of the possum’s ideal habitat – the old-growth mountain ash forest in the Central Highlands of Victoria – was burnt in the 2009 bushfires.

The challenges facing this iconic species are significant. It has undergone very severe population declines in recent decades with numbers having decreased by more than 80 per cent since the mid 1980s.

That is why we will be working closely with the Victorian Government to find a solution which will help save the possum for future generations.

First and foremost, I have already asked my Department to work with Victorian Government officials and commence a review and update of the Leadbeater’s possum draft Recovery Plan. This Plan must be finalised and acted upon.

The Australian Government is already taking significant action to protect threatened species. In 2014, we initiated a new national approach to saving our threatened species with the appointment of Australia’s first Threatened Species Commissioner. Since then, we have invested more than $76 million for practical science-based actions, to turn around species declines.

As an example, the Australian Government is supporting Zoos Victoria to grow habitat for lowland Leadbeater’s possum and helmeted honeyeater populations. Through funding under the 20 Million Tree Programme, the Government will help Zoos Victoria to plant 112,000 trees at Coranderrk

Bushland Reserve which will provide breeding populations of these species with suitable habitat to help their recovery.

In addition, the Australian Government’s National Environment Science Programme Threatened Species Recovery Hub will be investing $30 million over the next six years in practical science and field work to test and explore options to tackle the threats to our native animals and plants.

(ENDS)
Posted by Peter Campbell at 4:45 pm No comments:

Victoria's state animal emblem, the Leadbeater's possum, is set to be formally recognised as being on the brink of extinction, leading to the Andrews government fast-tracking a program to identify more colonies of the species.

But the state government has again stopped short of backing a new national park to protect the Leadbeater's habitat, which conservationists and many scientists say is crucial to ensuring the species' survival.

It is understood federal Environment Minister Greg Hunt will declare next week that the Leadbeater's formal national threatened species status has deteriorated from "endangered" to "critically endangered", considered the last step before extinction in the wild.

There is no accurate estimate of how many Leadbeater's possums still live in the wild, though government modelling has previously put the range between 4000 and 10,000 with large caveats.

Concern for the species' survival soared after the 2009 Black Saturday bushfires destroyed 45 per cent of its primary habitat in the state's central highland forests, north-east of Melbourne. Conservationists say continued logging of the species' habitat has further increased the pressure.

Hope grew among some environmentalists this week that the impending federal decision on the Leadbeater's conservation status might see the state government give some form of public support for a new national park.

Numerous conservationists and scientists – including Sir David Attenborough and Dr Jane Goodall – have supported a campaign to set up the "Great Forest National Park" in the region, which would encompass much of the highlands forest.

But the area is also one of the state's primary native forest logging areas.

During last year's state election campaign Labor had been expected to support a new national park in some way, but reportedly dumped the policy at the behest the CFMEU, which represents forestry workers.

Instead the Andrews government promised to establish a taskforce of industry, unions and green groups to reach common ground on issues facing forestry, including jobs, economic activity and environmental protection. Ms Neville said the relevant groups were now working on how the taskforce will operate.

"We will consider any reasonable proposals reached by consensus through the industry taskforce regarding the establishment of any new national parks," Ms Neville said.

The surveys follow recommendations by a previous advisory panel, which was led by industry and Zoos Victoria and established by the Napthine government. The Andrews government says it is implementing the panel's recommendations, which did not include a new park and were criticised as being ineffective for the species' survival by environmentalists.

Campaigner from MyEnvironment Sarah Rees said the latest survey measures were dangerously close to status quo, "which is what is leading this animal to extinction."

"What we need is an improved reserve design, being the Great Forest National Park, to stop extinction, not a bunch of cameras, a search for habitat that does not exist and an expectation that the community will do the work of paid government personnel," she said.
Posted by Peter Campbell at 3:52 pm No comments: