Something is knocking the state's owls off their perches 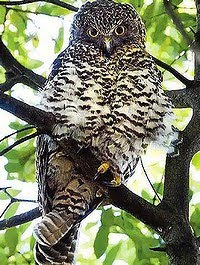 WHAT'S happened to Victoria's carnivorous owls? A significant number have vanished, and the Department of Sustainability and Environment isn't sure what's going on.

It's assumed the top end of the woodland food chain is either starving to death because its food source has been killed off by the drought and fires, or it is relocating to parts unknown, but it will take years to find an answer.

The DSE has been monitoring the owl populations - including that of the powerful owl, Australia's largest owl - since 2000. Since then, detection rates in South Gippsland and the Bunyip State Park have dropped by half.

In some areas of the Bunyip State Park - half of which was lost to the Black Saturday fires - detections of the sooty owl have dropped to a third.

DSE owl specialist Ed McNab says: ''We don't know what's happened to them. We can only assume that drought has played a major role. We noticed the downward trend before the fires. They're very mobile birds, but the fires would have had an impact on their prey.''

Powerful and sooty owls, both officially listed as vulnerable, mainly eat sugar gliders and ringtail possums. The possums in particular are known to have little resistance to chronic hot weather, and their failure to thrive in the drought is probably the main reason why owl numbers have dropped. While owls may have escaped the Black Saturday fires, many possums would have been incinerated.

Mr McNab says the smaller carnivorous birds, such as the barking owl, are able to sustain themselves on insects. Powerful and sooty owls can also eat rabbits and birds such as magpies and kookaburras, but they need to make the change in their diet before energy loss reduces their ability to effectively hunt.

''They'll either starve or take something else,'' said Mr McNab.

Equally disastrous for the owls was the loss of old trees with large hollows that they require for nesting. They might have shifted elsewhere to recolonise, but this would mean taking over an already occupied territory. ''And there tends to be a home-ground advantage in these battles,'' said Mr McNab.

The occupying bird has inside knowledge of the territory and a greater capacity to defend its patch, because it's energy store will be higher. Flying great distances in search of food saps the strength from large birds and even causes them to starve.

The DSE's biodiversity team leader for West Gippsland, Dr Rolf Willig, said the top order carnivores were ''an indicator species as to the well-being of the ecosystem. Theoretically, if they're happy, the rest are happy.''

For five years Dr Willig has been running a playback monitoring program in South Gippsland, where recordings of owl calls are played into the dark and answering calls are recorded. The number of birds answering calls have dropped significantly this year.

''The results indicate we may be having a delayed reaction from the fires,'' he said. ''The possums not actually killed in the fires might have been exposed afterward, and the owls picked them off, eating all the food that was left.''

It will take years to find out what's happened. ''And not just three or five years. We'll be out here for a long time,'' said Dr Willig.
Posted by Peter Campbell at 10:55 am