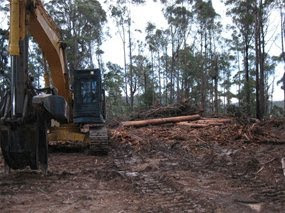 The timber giant says the forest industry has lost the debate on native logging, and the company plans to become a solely plantation-based business.

"It's critical that our local MPs step up here, and demand a share of the $20m currently available for industry restructuring," he said.

"Because there will be contractors who will now realise that the writing is on the wall."

Mr Plumb says the operation at Twofold Bay will be hit next.

"Native forest logging and woodchipping is not sustainable, and the future is in a plantation-based industry," he said.

"The pressure and the focus on woodchipping around the country will now move to other operations such as the Eden woodchip mill."

Source
Posted by Peter Campbell at 11:39 am