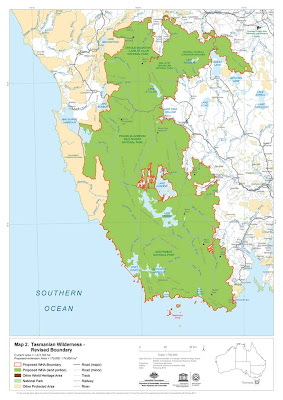 After decades of conflict, sometimes fought tree-by-tree, chainsaws have been stilled in the old growth forests of Tasmania's world heritage wilderness.

About 120,000 hectares of old growth forest was formally included in a 170,000-hectare expansion of the existing Tasmanian Wilderness World Heritage Area, giving those trees the highest level of conservation, Mr Burke said.

''These are extraordinarily precious areas of forest,'' Mr Burke said. ''I have camped in and walked through these forests and they are some of the most amazing places on earth.''

Campaigns to protect the forests of the Weld, Styx, Florentine and Great Western Tiers have been under way for more than 30 years.

Conflict over logging has involved many blockades, street rallies by thousands on each side, assaults on environmentalists, and the loss of logging machinery to fire-bombing.

In one individual protest, teacher Miranda Gibson spent a national record 457 days atop a tree in the Styx before nearby bushfires forced her down in March.

''Today I think of the wedge-tailed eagle that I watched fly above my tree, whose habitat was once under threat and is now protected, and of the Tasmanian devils who lived in the forest 60 metres below my platform who can now raise their young in peace'' Ms Gibson said.

The world heritage nomination was the centrepiece conservation achievement of three-year peace talks between industry and green groups, forced by a collapse in native timber markets.

A key participant in the peace process, Vica Bayley, of The Wilderness Society, said the extension finally recognised these forests as global treasures.

But it does not spell the end of environmental conflict in Tasmania, as division widens over the Tarkine region of the state's north-west.

Bob Brown, who drove early forests campaigns and became national leader of the Greens, recently became patron of the Save the Tarkine movement, which is blocking mining in the Federal Court.

Congratulations! And a heartfelt thankyou to Miranda Gibson and everyone else involved in saving this old growth forest.