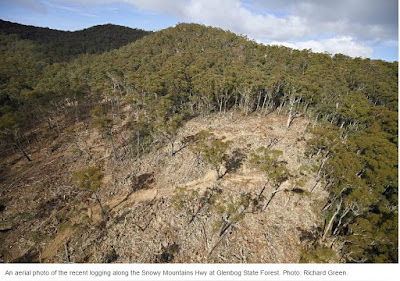 Late at night on June 23, the Senate passed legislation cutting the RET from 41,000 gigawatt hours to 33,000 in an agreement between Labor and the Federal Liberal Government.

Under the new legislation, native forest wood waste can receive RET certificates and be eligible for financial incentives, despite being removed from the target in 2011.

This move was made against protests from Labor and The Greens, who said this inclusion could encourage the unsustainable harvesting of native forests.

“Wood has been recognised as the main source of renewable energy for thousands of years,” he said.

Mr Mitchell said trees turn solar energy into wood, which can then be burnt, so it is “basically a renewable energy”.

However, Federation University Professor of Environmental Science Peter Gell said it was a “falsehood” to claim this type of electricity production as renewable.

“You can’t ‘renew’ or replace the burnt carbon stored in a 100 to 600-year-old forest in the turnaround time needed to address climate change,” Professor Gell said.

“If all Australian native forest log production in 2009 had instead been burned for electricity, it would have substituted as little as 2.8 per cent of our coal-based power generation.

“So, we risk unleashing an industry with the potential appetite to decimate our native forests, and all the services they provide, to gain very limited emissions benefit.”

Forty scientists – including Professor Gell - in such fields as ecology, chemistry and biology have signed an open letter to the Australian Parliament stating their opposition to the inclusion of native wood as an energy source under the RET.

“There is no logic in basing ‘renewable energy’ on the need to secure viable large supplies of ‘waste’ wood from a fast declining primary industry.”

While Mr Mitchell said while times had been hard for the forestry industry, things were improving as demand was growing for forestry products - especially in third world countries.

“It’s been tough times, but we posted a profit last year and we are going to make a profit this year,” he said.

A spokesperson for NSW Forestry Corporation said prior to the new legislation, native forest wood waste could already be burnt as an energy source.

Mr Mitchell said while this was the case, the waste was not applicable for RET certificates.

Under the Renewable Energy (Electricity) Amendment Bill 2015, biomass, or fuel, from a native forest must be harvested for a purpose other than energy production.

Acceptable biomass includes by-products of a Commonwealth or state approved harvesting operation, or an operation carried out with ecologically sustainable management principles.

Mr Mitchell said the industry is heavily regulated and if you cut down trees for the specific purpose of generating power you would not get renewable energy certificates.

A Forestry Corporation of NSW spokesperson said there had not been a demand for wood-fired power stations yet, but there may be opportunities in the future.

“We are aware of some private companies who are already investing in renewable energy generation elsewhere by combining waste from sugar mills with wood waste from timber plantations,” the spokesperson said.

IN 2011, a proposal for a wood-fired power station at South East Fibre Exports’ (SEFE) chipmill in Eden stirred up contention in the Bega Valley community.

However, the Federal Government removed native forest wood from its renewable energy scheme that year and the plans did not go ahead (BDN, 15/6/11).

“We had plans a few years ago, but they were shelved as the amount of waste produced here reduced as exports reduced, so it was not economically viable to go ahead with that project anymore,” he said.

“It is a very fragile environment as the government can change the regulations very easily.

“So it is difficult to go ahead with a large, expensive investment unless there is certainty.”

In 2012, a DA was approved for a wood pellet fuel plant at Eden, which went on to produce wood pellets for heaters for a period of time before being shut down.

The plant will be leased this year and resume production.

Mr Mitchell said the new bill would have no effect on the wood pellet plant.
Posted by Peter Campbell at 8:45 pm