While Brumby talks tough on climate change at Bali, Melbourne’s carbon stores and catchments are woodchipped

The Wilderness Society responded with shock today to news that the Brumby government has ignored pleas from environment groups and started logging in one of Melbourne’s water catchments.

“We are calling on the Premier to intervene immediately to stop the logging,” said Victorian Forest Campaigner Luke Chamberlain.

“Catchment logging will result in the loss of millions of litres of water and the release of thousands of tonnes of carbon dioxide into the atmosphere. We are stunned that the Brumby government would log old growth forest in Melbourne’s water catchments during our worst ever drought and with the looming threat of climate change.”

“While Brumby talks tough on climate change at Bali, Australia’s biggest carbon stores are being destroyed for woodchips.”

“These trees safely store as much carbon as any on earth, and the logging, burning and soil disturbance releases vast amounts of global warming carbon dioxide into the atmosphere.”

“Logging reduces water supplies into dams by up to 50% and it takes the forests up to 150 years to release as much water again.”

“98% of these trees which supply water and store carbon will now end up as woodchips, palettes and posts, all products which should instead come from Victoria’s massive plantation estate.”

Nestled between the Yarra Ranges National Park and the protected Upper Yarra catchment less than two hours drive east of Melbourne, the Armstrong catchment contains some of the most spectacular stands of unprotected old growth forest in Victoria and is one of Melbourne’s water catchments. 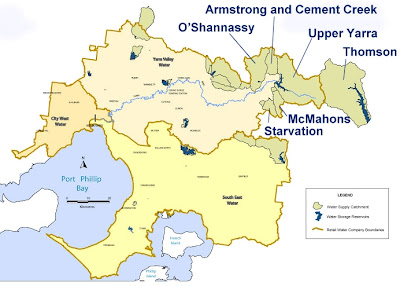