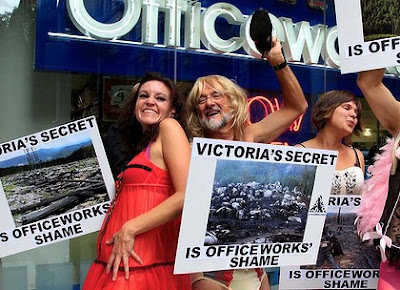 REFLEX, Australia's best-known brand of paper, is set to lose its international green accreditation within the next two months unless its manufacturer can strike an unlikely deal with some of its fiercest enemies.

The loss of Forest Stewardship Council (FSC) certification would force Australian Paper, which makes Reflex, to either abandon its public commitment to the FSC process or shift its sourcing from native forests to more expensive plantation timber.

News that Australian Paper's international certification is at risk will come as an embarrassment to Agriculture Minister Peter Walsh, who recently threatened to take forestry jobs away from the Yarra Ranges Council unless it ends a boycott of Reflex paper.

Australian Paper's problem arises because FSC rules have been tightened since its certificate was issued five years ago. Under the new rules, the company must consult with stakeholders over logging in ''high conservation value'' areas.

Australian Paper's certificate expires on July 26, leaving it little time to reach consensus with environment groups, many of whom oppose logging in forests containing endangered species.

Complicating the process, one of the groups, Central Highlands-based MyEnvironment, has lodged a complaint about Australian Paper's auditor, Smartwood, with the FSC head office in Germany.

The complaint has sparked an international review of Smartwood, a division of environmental standards body Rainforest Alliance, that could lead to its authority to audit wood supply being revoked.

''My understanding is that we could, in theory, be suspended, but we're a long way from that,'' said Smartwood spokeswoman Anita Neville.

''If they find flaws in the system, corrective action is required.''

She said that under the ''annex 3'' system, which governs consultations over high conservation areas, ''100 per cent agreement'' between Australian Paper and environment groups was not required.

''You have to eliminate the worst cases of disagreement, and that's not always easy,'' she said.

FSC Australia chief executive Michael Spencer said that under the organisation's rules, Australian Paper needed to consult with all stakeholders with an interest in the forest, including environmental groups.

Asked what would happen if no deal had been struck by July 27, he said: ''My understanding would be, and I haven't dealt with this in the past, their certificate would lapse if it hasn't been renewed.''

MyEnvironment director Sarah Rees said Australian Paper had made contact with her on Thursday. ''We're really receptive to helping the company move its wood supply from native forest to the burgeoning plantation sector,'' she said.

In any case, she said, the Black Saturday bushfires had slashed the amount of wood left in native forests to about two years worth of supply.

''The real opportunity for the company is to get the Australian Conservation Foundation and the Wilderness Society and local environment groups standing by them saying, 'Job well done'.''

In a statement, VicForests spokesman David Walsh said the logging company ''supports Australian Paper's work to achieve certification to a range of industry standards - including its efforts to maintain FSC certification''.
Posted by Peter Campbell at 4:18 pm