Lingerie-clad protesters strip down for a cause

Cheeky wilderness warriors showed plenty of skin as they hit the streets of Melbourne in a chilly protest this morning.

Wearing nothing but lingerie, the group from the Wilderness Society braved temperatures of just 14.2C to spruik their cause at 9.30am today.

The protesters were voicing their opposition to the wood-chipping of Victorian native forests to make Reflex paper.

Spokesman Sean Vagg said the stunt was a chilly way to get the point across, but a lot of fun.

"It was very chilly, there was a lot of dancing to stay warm," he said.

Mr Vagg said many had asked if the group hired models.

"People had thought we hired professional models, but it was just us," he said. 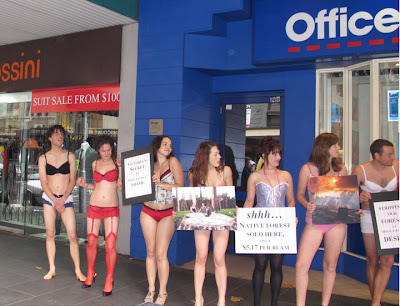 This is a great inspiring article.I am pretty much pleased with your good work.You put really very helpful information. Keep it up. Keep blogging. Looking to reading your next post.sexy lingerie