In an unprecedented court case South East Forest Rescue took an action against South East Fibre Exports (SEFE) and Bega Valley Shire Council in the NSW Land and Environment Court two weeks ago for building a factory that makes wood pellets from native forest trees.  SEFE is a joint venture between Nippon Paper Industries Co Ltd and Itochu Corporation.  SEFE operates the woodchip mill near Eden and is a major exporter of woodchips which come from forests from Nowra out to Tumut down to East Gippsland in Victoria.  Wood pellets are commonly used to fuel wood-fired power plants.

Bega Valley Shire Council granted the development consent in June, despite much opposition from the community, despite the factory being much bigger than the application originally stated and despite being advised by SEFR that if the council consented they would be in breach of the law.  SEFR also advised SEFE on the day of consent not to begin building the pellet factory as SEFR would be taking legal action.

The court case began on 2 September.  The decision handed down on Friday stated that the pellet factory, which has already been built despite being warned not to proceed, has been invalidated.

It was found that Council did not consider the public submissions, the principles of ecologically sustainable development and the zoning of the land.  The Court’s decision reveals an arrogant approach by BVSC which has now been revealed as unlawful. This means that South East Fibre Exports must not operate the factory or process wood for it.  Any action SEFE take from here will be deemed unlawful.

“This case is important in that it is the first time in thirteen years that the public has been able to bring an action in a NSW court against the woodchipping industry,” said Ms Lisa Stone, spokesperson of South East Forest Rescue.  “It’s an amazing win and a great decision.”

The public are tired of the woodchipping industry being a law unto themselves.  Further the local government and the State government have been co-opted into this corruption of due process.  This case shows that any decision maker must take the public wishes and the principles of ESD into account.

Burning native forests for electricity or using them for wood pellets is one of the greatest threats to the forests of the world.  The Commonwealth government has announced that forestry will have to start accounting for its greenhouse gas emissions but that wont happen until at least 2015.

“The time for waiting is over, the time has come to follow New Zealand’s lead, honour Australia’s international obligations and end native forest logging altogether,” said Ms Stone.  “The protection of our native forests is of urgent national and international importance in these times of global climate crisis.  It’s time to prove that political will is not extinct and put an end to native forest logging, for us and our children's future.” 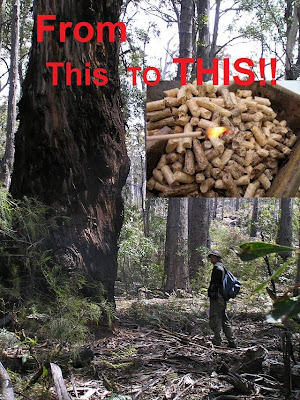