Following the reports on unlawful logging in State forest on the south coast, the conservation group South East Forest Rescue today found more illegal logging in Yambulla State Forest.  This is the third time these type of breaches have been discovered in these particular compartments.

The conservationists are calling for a halt to native forest logging operations. 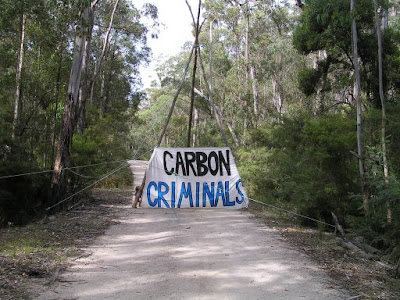 Environmentalists used a large wooden tripod attached to a structure in a tree 25 metres high with a person in it to halt logging operations south of Eden on the New South Wales far south coast.

There were four Rocky Outcrops in Yambulla State Forest Cpt 444 that have been logged.  This is unlawful under the licence conditions. (Eden Region TSL regulation 5.11).

"These breaches have caused major environmental damage. We have called on the Federal Minister for the Environment to take action.”

“We’re calling on the NSW Minister for the Environment to prosecute Forests NSW without further delay,” she said.  “Verbal and written warnings have been ineffective in rectifying this behaviour nor commensurate with the degree of environmental damage being inflicted upon threatened species habitat.”

"FNSW has had enough chances to get this simple direction right over 13 years and have failed miserably.  The time is over for 'education'. It is now time for the government to get serious and prosecute public
forest offenders of serious environmental damage as they are prosecuted on private land."